Hooray for the daddies of little girls who keep them safe yet teach them not to be afraid of getting their feet wet! ♥ ♥ ♥ 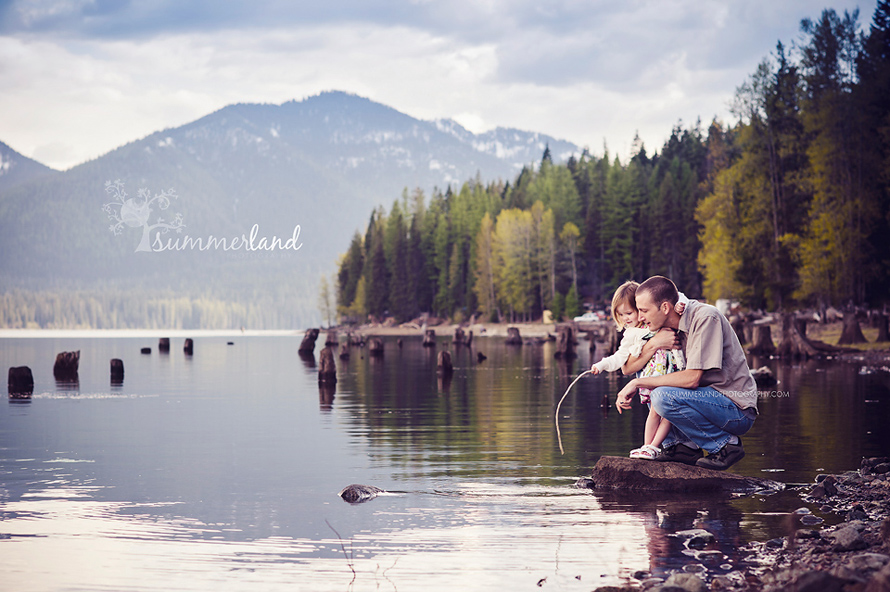 This photo was taken at Bumping Lake near Washington State’s Mount Rainier at a recent photo shoot. On my Facebook page I was asked how I got both them and the sky exposed properly. The short answer is that I used my off camera flash. If you want to know the longer version stick around, and I’ll give you an ear full.

The skies during the session were beautiful after a recent storm, and I wanted to make sure they weren’t blown out. To do that I underexposed the image a little bit to keep the skies nice and dark. My in camera meter on matrix metering told me that exposure. I then took a spot meter reading off their faces, and compared that to my hand-held incident meter. The hand-held meter will be more accurate because it’s not influenced by colors like your in-camera reflective meter; however I’m on the shore so I can’t get right next to them to to take an incident meter reading so I use both and average them.

Now to pick an exposure. I start off with what I want my aperture to be. In this case it was f/4. That’s a little higher than I normally shoot, but I wanted to make sure they both were in focus as well as show off the beautiful landscape. The exposure for the sky is going to have a much faster shutter speed than the shutter speed exposure for their faces. They trick is to pick an exposure that’s between them, but a little closer to the sky exposure than their face exposure. That way I still have detail in the sky, but the trees and water don’t go too dark. I choose 1/250 s at ISO 100 and I’m shooting in Manual mode. I then checked the back of my camera to make sure the highlights weren’t blown.

Now, if I left this exposure as is I’d probably be OK with their faces having enough light because the water is reflecting light back up at them, but I’d have to do a lot of Photoshop magic to bring out the details. Why do all that post production work if you don’t have to. If there had been more sunlight, I would have just used a large reflector to bounce light back at them; but the sun was going in and out of clouds and wasn’t reliable. To fill in the two of them just a little bit I had my SB800 flash and an umbrella on a light stand on the shore to camera right. It’s attached to a quantum battery pack to help it recycle faster and triggered by a PocketWizard FlexTT5 Transceiver. Because it’s somewhat far away the result is very subtle, but it does the trick of filling in the shadows on their face beautifully.

Now this big long explanation makes it sounds like it took five minutes to set up this shot. Thankfully that’s not the case because I totally would have missed this beautiful moment between them if it had. I already knew the exposure range I was using for the sky. The light stand was set up and ready to go, and I just moved it to where I needed it. So all I had to do was adjust the exposure I already had to bring it a little closure to the exposure for their face. The result: a beautiful moment captured forever between a father and his young daughter. 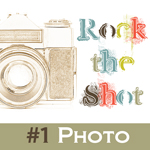 Looking at your photos, I would have guessed you were a 100% natural light photographer, but reading this post tells me you use that off camera flash sometimes. How often do you use it and do you take it with you on every shoot?
Love this shot, its one of those where you say to yourself…”dang I wished I’d taken that shot!”…awesome!

Also your shots are all super tack sharp. What Nikon body and lenses do you use, I know you have to use the prime lenses…to be that sharp!??

Thanks Chris! That’s really kind of you to say. I do take an off camera flash to every shoot, but I don’t always use it as it depends on the look I’m going for. I’m more likely to if it’s cloudy, the skies are cool and I want to preserve it (like sunset shots), a night time shoot, or a commercial shoot. I have been using it more since I got the D4 camera as it works seamlessly with the PocketWizard Flex. Approximately 70% of the time, though, I’m using a reflector because it’s quick and easy and it’s the most mobile with little kids. They’re all just a tool, and as an artist I want access to all brushes so that my vision isn’t limited by any one trick or skill. Hope that helps 🙂

Wow ! your photos are stunning and this one is exceptional! I have a question about the umbrella … is it the shoot through white type or something else? Thanks for sharing .

Thank you Rebecca. It’s just a plain old silver and white reflective umbrella. I use one of those most times. Sometimes I’ll use a small collapsible soft box or a brolly box too if it’s windy, I want a softer light, I’m gelling a light to make it colored, or I don’t want to worry about light bouncing back into my lens. If you keep it at a 45degree angle to your subject and you that’s usually not a problem.

Your photographs are so exquisitely beautiful. I’m 33 and just now building a small photography business and it’s images like yours that make me want to continue working to hone my skills. Sometimes it’s daunting, how much there is to learn, but it’s so much fun. Thanks for the inspiration.

Thank you Ilene! I’m so glad I could help in any small way. Good luck on your journey!

LOVE! Thanks so much for sharing.

I have a confession to make. It was my dearest wish to have a separate blog post for each and everyone of these sessions, but time once again time bit me in the butt. So many sessions near and dear to my heart, yet so little time to blog about them. While I did sneak a few from this time period in on you already, I was going to use the slower winter months to catch up on all of the rest of my late fall and winter blog posts. I didn’t really get that breather. That’s a good thing, though!

If you follow my Facebook page, you may have had the chance to see a few of these. If not, I hope you enjoy this massive smorgasbord of photo goodness. I know I loved making every one of them. 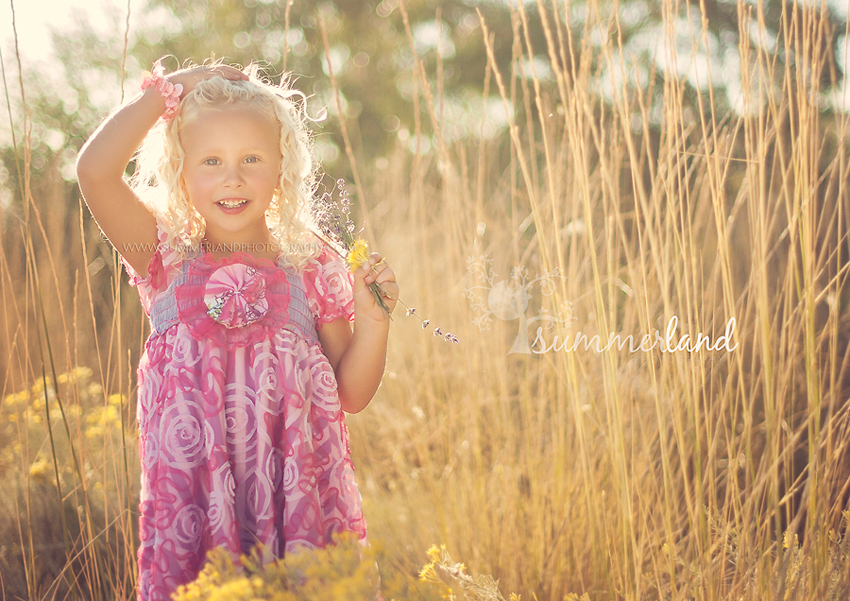 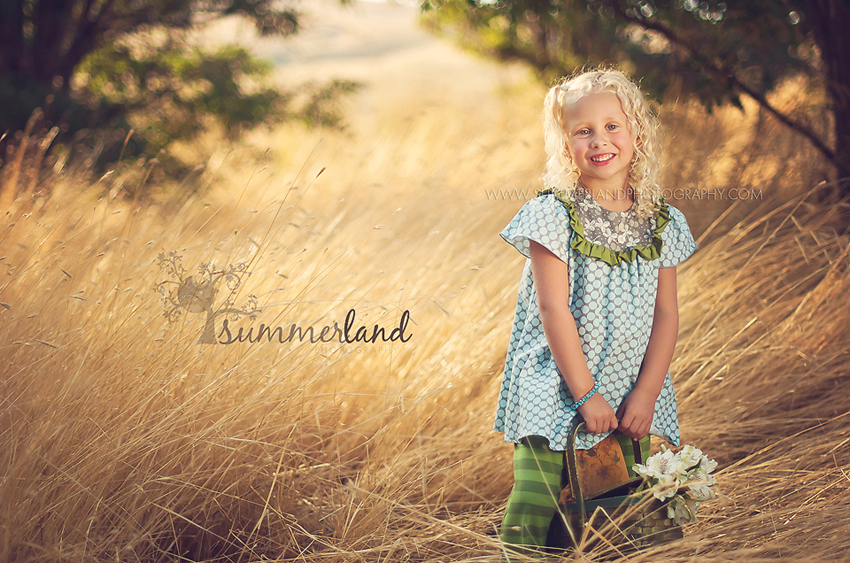 Big news here at Summerland photography. I’m so excited to announce that starting May 1, 2012 Summerland Photography will have a Kennewick, Wash. studio space!!!

Now all my Tri-cities, Wash. area clients will have a place to come for client consultations and ordering sessions, and for my national and regional clients my one-on-one photography mentoring sessions. This new studio space also has a beautiful and spacious shooting area (squeal!!!!) with both natural light and studio strobe options. That means you now have another choice for newborn, baby, child, and maternity portrait sessions.

Of course I’ll still be doing on-location shoots. After all it’s just too gorgeous here in Washington State not to use what God gave us. But now there’s another option if you want to do indoor sessions, or dramatic studio lighting, but you don’t want me to take over your home (or you clean it, hehehe) for your portrait session.

The biggest change with this new location will be with my newborn sessions. On-location newborn session are still offered; however in-studio newborn sessions will have a reduced session fee. Plus, you’ll have full access to all of my props and backdrops (after all, my car can only fit so much).

I can’t wait to share this new studio space with you!!!!

And because I can’t do a blog post without a photo, here’s a handsome little fellow from a recent newborn session:

Thank you Larry! You’ll have to come check it out on your next visit 🙂

Allow me to introduce you to one very handsome fellow: Jax. Watch out, though, he’ll steal your heart quicker than you can say future cowboy. Jax was definitely rearing to go for his newborn portrait session. His mamma went into labor while looking at her maternity pictures from this session. I guess he was just ready for his own close-up because he showed up three weeks early. Look at all that hair! Imagine what it would have been if he’d held out for a few more weeks. Regardless, he was a total angel for his session. I absolutely love his images. I especially love when it’s warm enough we can take a newborn outside to show off our beautiful landscape. We might not have many trees, but we do have open skies and expansive vistas.

It’s a big world, baby
And you’re little
For a Little While

So absolutely B-utiful. I love the colors of the field pictures.