What would you save if your house was on fire?

OK, I admit it. The other night I was watching The Bachelor out of the corner of my eye while imaging photos on my computer. One of his dates asked him the question, “If your house was on fire, what would be the one thing you’d grab?” The response: his old sneakers. Seriously? Hey dude, what about your kid?

The question got me thinking, though. What would I grab? If my husband and son were safe, what would I take if my house were on fire? My son’s baby album? Maybe, I did just get it finished after eighteen months. But his photos, along with all my clients, are archived off site, and I would be able to reprint them if I had to.

My answer is this photo. It hangs on my dining room wall with two others from the same photo essay. I look at it every day, and yet every day I still love it. It was part of a project I had wanted to do for years.  I finally made the time during my last month at the newspaper.  I don’t really consider myself a landscape photographer. I’ve made a career of photographing people. It’s what I do. Yet, I am fascinated by old barns and rural buildings. The history they tell in the bones of their bleached wood calls to me. I have to document them before they are gone forever.

This barn I discovered on assignment near Centerville, Wash. years earlier. It took me weeks of public records searches before I could find out who the owner was, so I could get permission to photograph on their property. The town is an almost two-hour drive from the newspaper, and the one day I had free it was raining cats and dogs. I was so bummed the whole drive there thinking I was wasting my time. But, I must have done something to make the photo gods happy because as soon as I got close the rain broke, and the sun started peeking through the storm clouds.

I have never moved so fast in my life. I parked the company car in a ditch and threw open the trunk. I had borrowed another photographer’s old medium format camera to do the project because you just can’t reproduce that look any way else. I pulled out its cumbersome hard case and tripod, and I tried not to drop them or rip my pants as I climbed over the barbed-wire fence. The light was not going to last, so I flew across the old field to get into position. Ten minutes later it was over. The light was gone. Had I gotten it? That’s the problem with film. You don’t know what you have until you develop the negatives and scan it in.

They ran the photo with five other images as a Sunday feature a week after I left the newspaper. It turned out nice, if not a little dark in the paper; yet, it wasn’t until I had a print made that I finally realized what I had. I used the now defunct Ivey Imaging in Seattle. I don’t know if another lab will ever be able to reproduce their print quality. When I opened the box and pulled out the 30 x 30 print, I couldn’t believe what I saw. It was gorgeous. To me it was most beautiful piece of art I had ever created. When I look at the photo I don’t just see the image on the paper. I see myself driving for hours with the lowest of expectations. I feel the rush of adrenaline when the sun breaks, and I haven’t even parked the car yet. The chilly air as I run across the furrowed field, the heavy tripod bumping against my knees. And finally, the deep satisfaction that I’ve forever captured the soul and emotion of an ancient barn I first discovered so many years earlier. 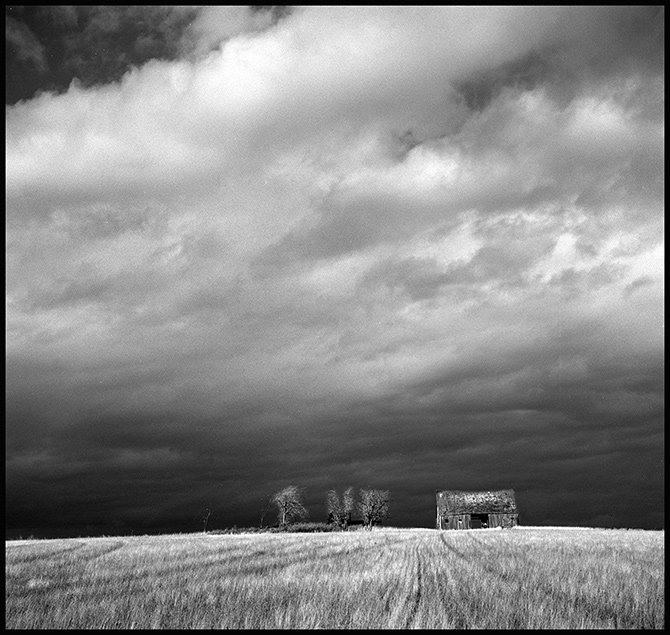 Beautiful picture, but I have to say the post of “what would you save” rang so true. One of the lessons I remember clearly learning from my father was “If the house is on fire the only thing to worry about saving is the photographs”. In an age before digital, often the only copy of a picture was the one on the wall or in the album. Negatives disappeared over the years and you only had the one print.

Furniture, clothes, dishes and toys are replacable. Save the photos. They are our link to our memories.